Please ensure Javascript is enabled for purposes of website accessibility

Ospreys are an apt mascot for Colonial Beach because they are a preservation success story.   Their preservation parallels Downtown Colonial Beach's efforts to thrive by preserving the town’s historic character and showcasing the rich early American history in the surrounding area.  Osprey populations were declining precipitously during the 1960s. Scientific research led to the discovery that toxic pesticides were causing the shells of the eggs to thin so much that they were crushed when the parents sat on them. The data collected on them not only reversed this trend for the ospreys, but was instrumental in saving bald eagles and peregrine falcons from the brink of extinction as well (see report here and Rachel Carson’s book Silent Spring).

The ospreys’ resurgence is a beacon of hope in these troubled times.  They exemplify the role of science in saving life on our planet.  For Colonial Beach, they are a source of inspiration that by preserving our heritage, the revitalization that has been developing in the last few years will continue and that our restaurants and small businesses will survive and flourish in the future.

Bird watchers admit it can be difficult to spot some birds, especially, if they’re not colorful or when the trees are thick with leaves in the spring. Not so in Colonial Beach, Virginia, where the large, boldly marked ospreys are clearly visible as they soar above the Potomac River, diving for a fish or engaging in other antics.

Colonial Beach, Virginia is a little town with a lot of ospreys. The population is around 3,500 people and at last year’s count there were some 25 osprey nests. Many of the birds nest on platforms built by Dominion Energy to keep them off utility poles. Others nest in trees or out on the water near the town’s many marinas.

They are not shy and adapt well to human activity. One breeding pair in the town comes back year after year to nest next to the High Tides Restaurant Black Pearl Tiki Bar, where even hard rock music doesn’t ruffle their feathers.

There’s a nest near the stage on Town Hill where festivals, carnivals and other events occur, including our Osprey Festival. (If there’s such a thing as “Party Animals,” maybe ospreys are the “Party Bird!”) At the 2021 count there were some 31 ospreys in town and even more in the near vicinity.

Occasionally, they will locate inconveniently. They’ve been known to plop their nests atop high chimneys or on the decks of boats. The town is keeping a sharp eye on its Water Tower to make sure a nest on top won’t interfere with its new paint job.  And they can be insistent about staying put once they’ve built their nests, so people keep on the lookout to shoo them away when necessary.

It’s rumored that people have been hit in the head with an airborne fish and that gardens are getting fertilized with the occasional dropped meal.  Mostly, the abundant ospreys in Colonial Beach are good neighbors to the families here while they raise their own bird families in large, well-constructed nests.

Although this bird looks like a chicken, it is actually a rare white osprey, so rare that it is difficult to find any mention of one on the internet.  This is one of the ospreys that tried to set up its nest on top of a chimney.  That nest didn’t fare too well.

According to nest watcher Clay Thompson, the albino ospreys built a nest last year on Madison St just past Lossing Avenue in a very tall tree. Clay shared photos of the bird from late last year.

COLONIAL BEACH “OSPREY WATCHERS” WANTED.  PRIZE TO BE AWARDED FOR

Downtown Colonial Beach is looking for people to verify nest locations of this year’s breeding pairs.  Please send in their locations with the closest cross streets or addresses and whether they are on land or over water.  The information should be sent to ospreycbva@gmail.com.  Put OSPREY NEST LOCATION in the Subject Line so we can update the map for 2021.

If you’d like to nominate your birds for “King and Queen Osprey 2021,” give the birds a name and send us photos, videos and reports on their activities to the same email, this time with their names and location in the Subject Line. Towards the end of the season, we’ll arrange a vote.

A prize will be awarded to the “Osprey Watchers” whose birds are voted osprey royalty this year.   Everyone who sends in a photo and identifying location to ospreycbva@gmail.com will have their birds' nest and other photos or videos posted on this website.

Ospreys Are in Colonial Beach! 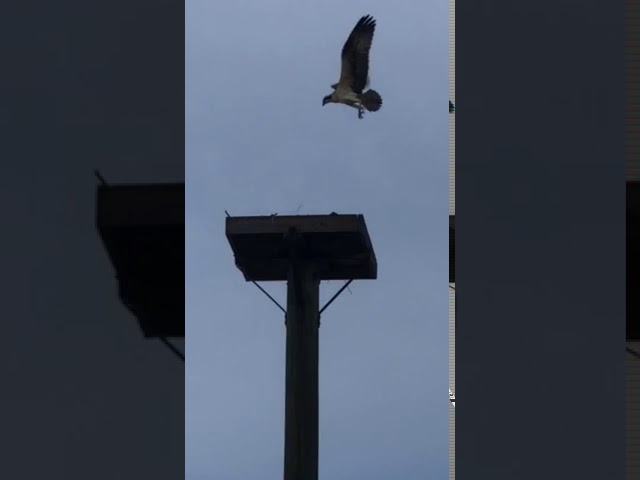 The Chicks are Trying Out Their Wings